Technigro teammate’s ‘eureka!' moment aims to help thousands of people to save their cars, their caravans – and their backs! 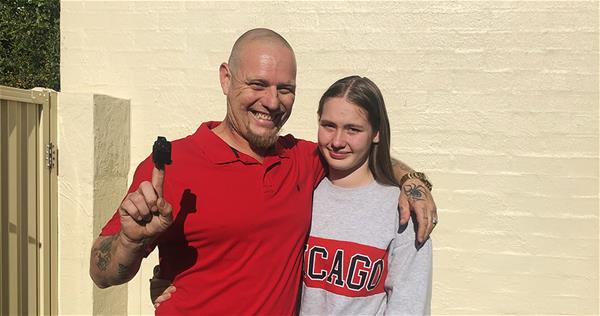 When Citywide Group team member Brad Tonkin was moving house last year, he was struggling to hook his car up to a trailer outside his new home when he had a brilliant idea.

Instead of straining his back “for the hundredth time”, he asked his 12-year-old daughter Sophia to film his reversing car from the trailer-hitch – while he watched on Facetime on his dash-mounted phone.

“Once the camera was on, I lined the tow ball up perfectly with the hitch first time,” says Brad. “My daughter just looked at me and said, ‘Wow Dad, that was easy!’”

Eighteen months on, that ‘eureka moment’ could be about to revolutionise life for campers, boaters and caravan owners the world over.

But the 41-year-old father of six says he’s not in a hurry to leave his job as a landscaper at Technigro’s Yatala depot on the Gold Coast.

“The supervisors here have been so supportive of me while I’ve been breaking into the innovation business,” says Brad. “I love these guys, and I’m going to make sure I’m available to them even if my invention takes off.”

In fact, Brad, who secured a pending patent for his ‘Trailer Buddy’ in June, does not plan to get rich from his invention – at least not just yet.

He’s already pledged to split most of the profits between two charities for war veterans and disadvantaged children in the Brisbane area. “My second invention, the Boat Camper, is the one that’s going to make a bit of money for me,” he laughs.

Brad’s breakthrough idea is a miniature wi-fi ‘spy camera’ mounted on a flexible telescopic arm, which magnetically attaches to the back of a car or ute tray – giving the driver a ‘birds-eye view’ of the back of the car. A free app syncs the widescreen camera with a hands-free phone viewed from the driver's seat, providing a clear view up to three metres above and behind the tow ball.

“You can slowly reverse while watching the tow ball, until it’s directly under the hitch of your caravan or trailer,” explains Brad. “I guarantee that, with this device, you’ll never again hit the back of your vehicle!”

“It seems to be a ‘manly’ problem that a lot of guys injure their backs pulling heavy trailers onto their tow balls,” says Brad. “I’m hoping the Trailer Buddy will help to make this kind of injury a thing of the past.”

Brad’s colleagues and managers have rallied behind the effervescent Queenslander, whose trailer camera has gained a bit of traction among the safety-conscious roads and landscaping crews at Technigro, Citywide's subsidiary business.

“Brad uses trailers every day and he’s someone who doesn’t stop thinking about ways of improving things around him,” says Randall Fox, who manages Technigro’s Fleet and Assets.

“He’s thought long and hard about this challenge for trailer operators, and he’s devised a creative solution that’s going to make a lot of people’s lives safer and easier. I’ll certainly do everything I can to support him.”

Michael Lawson, an Innovation Culture Champion for the Technigro team, says the company really appreciates staff who think about ways of making their jobs safer and more efficient.

“I really encourage people not to hold back if they have a good idea to improve any aspect of their work,” says Michael.

“Although Brad’s invention may have limited industrial application, I have no doubt that it’ll be a winner for the caravan and camping markets.

“It’s a long time since I met someone who’s so passionate about something as Brad is about the Trailer Buddy. It’s a brilliant idea – and I have no doubt he’ll make it work.”