To the Cardinia Shire team, she’s affectionately known as the Goat - perfectly named for the bush clearing work on this rail trail project. 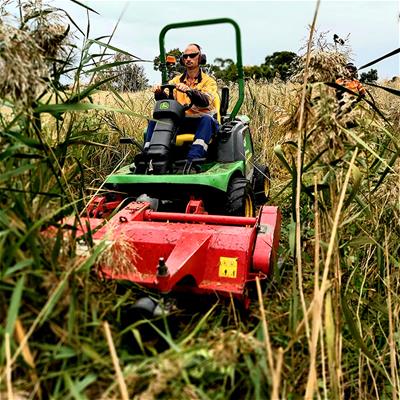 To the Cardinia Shire team, she’s affectionately known as the Goat, though the corporate Fleet team might uncharitably call her ‘Beyond Depreciation’.

Not that her age phases the operations team members who day in, day out still rely on the old Goat to get them through a few challenging jobs.

Recently, the ‘Cardy Crew’ was asked by Council to help with the initial stages of extending the Great Southern Rail Trail, presently a 68-kilometre route running from Leongatha to Port Welshpool, in Victoria’s South Gippsland region.

Cardinia Shire Council is spearheading the trail’s extension from Leongatha back up to Koo Wee Rup, with dense bush requiring removal – and that’s where the Goat, an old John Deere Mower, steps in.

“As part of the initial stages the structural engineers are required to gain access along the path to assess current structures, and then ultimately plan the construction stages,” explains Cardinia Operations Supervisor Sam Sweeney.

‘As the railway line has sat idle for so long (running between Dandenong and Port Albert, it ceased operating in 1994) it was very overgrown, as you can see from the images.

“That’s where we step in with our specialised equipment, knowledge of rural terrain, and different types of vegetation.

“Despite being 10 years old, and missing some paint, our John Deere Mower with Trimax flail is like a faithful old sheep dog. It turns up day after day for work and never misses a beat.

“We just can’t let her go, so with a bit of love each morning, we roll it out of the shed for another day of work in the rolling hills and open plains of Cardinia Shire.” 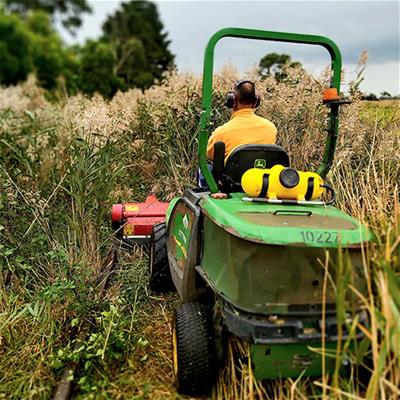 Photos: Pictured clearing the path for the project engineers are Natural Areas Team Leader Brett Pavlovic on the Goat and Jonathon Ussher on the brushcutter. (Photos: Sam Sweeney)